Words You May Never Have Uttered

Today's guest post is by Brandi Creasman Watkins, aka Bonnie Sherrill. Brandi was born and raised in the mountains of western NC. After being away for nearly a decade, she returned to her hometown and spent the next decade working in victim services and social work. She retired so that she could focus on her family, Thirty-One Gifts Business and her writing. She started blogging, writing & even published her first book, Mountain Notes to Grant-Writing in 2016. She is now working on the 2nd book in this series, Mountain Notes to Parenting, while she homeschools both of her youngest children. You can find more of Brandi's writings at her blog, A Country Girl Surviving.

Words You May Never Have Uttered

You may need a passport to enter another country, but you just need an open mind and some gas to reach the South. However, you may experience the same culture shock that you would endure in the Congo or African Sahara – we have similar language barriers and mating habits. You will certainly encounter those that think you should just turn around and head back where you came from. But…just maybe, if you are in the right frame of mind, you will find us just as fascinating as the Amish, the Cherokee, New Yorkers or the Mormons.

The single defining characteristic of any foreign culture is language and for real, the Southern language should count for a language in college prep. For example:

Befuddled. Definition: confused with a hint of ignorance to the reasoning that X topic is even being discussed. Like…why do you have to discuss ear wax when you could instead discuss the ramifications of Billy Bob thinking that he could fix the leak in his house with anything other than duct tape? This word MUST accompany the gesture of scratching your head at least one time during the conversation.

Flabbergasted. Definition: shocked with a hint of anger. You may hear this when a redneck stubs his toe and blames the wife for placing the incriminating obstacle in his path. Apparently, the wife thinks that if something is static for 50 years, her husband should learn to walk around it. Whatever!

Spirits. In the south, we refer to all alcoholic beverages as ‘spirits’ because it lifts our spirits to partake. Very simple. However, southerners don’t get the whole wine connoisseur mess….we make our own wine from the fruit that God gave us…right here in our backyards. The idea that ‘wine tastings’ happen, definitely befuddle us.

Tattoos. We all run into people and ask them about their tattoos and some get very upset if we insinuate that they had a personal experience with image that they later marked themselves with because they just get tattoos. BUT, in the South, our tattoos mean something. Period. Most may say MOM, some may say F-Obama, but they all mean something to us that will still mean it tomorrow (unless we were drunk.)

Mountains. Some may believe that this is a geographical distinction or even a place where they “vacation.” This couldn’t be further from the truth. ‘Mountains’ is a way of life. It’s a religion. It’s a people.

Helldamn. Although Webster does not recognize this as a compound word, it is the only compound word that can succinctly describe something that went wrong. This something could have been intentional, stupid or just plain fate.

Waterlogged. Definition: a state of being after too many hours in the water. In the olden days, logs were transported via the rivers and they stayed in these rivers for quite some time before they reached their destination. See, our words make sense to us!

Church. Definition: The single reason to defuse any argument under the sun. This word is synonymous with the Good Book, the people attending or the very argument that you can’t win. Church is the end all, be-all in the South. You don’t wear jeans to church….ever….under any circumstances. TV Shows do not have any place in a Southern Church – no divorce, no Modern Family, no Law & Order, no Teletubbies. Criminal Minds and other murder shows would be acceptable.

Caddywompus. Definition: describes when something is askew or off-centered. For example, I have this retarded tree in my yard that has limbs that are caddywompus and drives me to the brink of a misdemeanor. I would include a picture, but I don’t want to ensue riots, because we don’t have the parking space.

Oh Fresh Hell. Definition: A new ‘alternative’ way of thinking, acting or being. A southern woman might exclaim this after seeing her teenager come downstairs in all black attire and make-up or maybe hearing her son exclaim about the newest way to talk to his girlfriend. ‘Oh Fresh Hell’ may be timeless, but the shit it explains is not – just grab a homemade wine, get flabbergasted, drag them to church in the mountains and scream a Helldamn to those that are caddywompus.

This post is brought to you by the my personal friends on Facebook! I hope you enjoyed and please let me know if you have some Southern Terms that weren’t included!

I hope you enjoyed this guest post as much as I did! Brandi and I grew up in the same small town in western NC. I tried to think back to when I first met her but if you were from Andrews, NC everybody just always knew each other. She is still just as funny as ever! She reached out to me during my last hospital stay and decided that we need to team up to share some of our posts with us both being "small town Appalachian bloggers". I look forward to working with her again and sharing more of her hilarious posts in the future 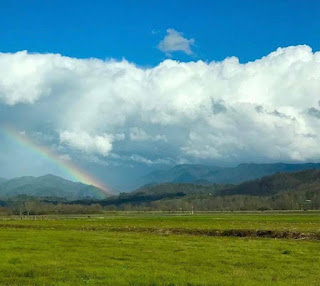 This is a pic from the area where Brandi & I grew up. Pretty, huh?
This was taken by my friend and fellow Andrews girl, Tammy West McCoy.