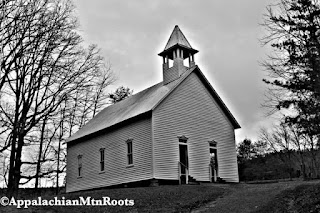 We visited Cades Cove during the first of this month & witnessed some folks having a funeral at this church. We've walked through most of the cemeteries in the Cove & seeing the hearse in front of the church got me to thinking about the old days. I thought about the lives that were changed after hearing the sermons there. I thought about the couples who started their journey by being married there. I also thought about all of the families who have had to say goodbye or as I like to say, "see you on the other side" there. The stories those walls could tell! All of this thinking got me to wondering about the history of the church.

"One of the more treasured Cades Cove images is that of the Methodist Church as captured from the Rich Mountain Road. Cove churches were forces for integration of the community's religious, social, and communications needs. The penetration of the Methodists into the Cove may have preceded that of the Baptists as Methodist circuit riders ministered to many isolated mountain communities in the early 19th century, Dr. Abraham Jobe's childhood memories included Rev. George Eakin preaching as early as 1823.

Sparse record exist for the events and circumstances of the early Methodist Church. The Cades Cove Church, is included among those of the Holston Conference's Little River Circuit in 1830. A Methodist church house was not erected until after 1840 when James F. Deaver deeded three acres of land for $25 to the Methodist Episcopal Church Trustees. Religion was a "shared" community experience with the church house often used by several congregational affiliations for individual and joint services such as revivals. Initial church houses were of log construction and typically functioned as schools also. The Feezell family, led by George W. Feezell and son William A. "Billie" Feezell, were prominent supporters of the Methodist Church. Billie deeded land in 1874 which provided the site for at least two church houses and a cemetery. The present church house was built by Rev.John E. McCampbell in 115 days for $115! It featured two doors and a physical divider to segregate males and females for the minimization of spiritual interruption with more earthly issues. The adjacent cemetery contains at least 100 graves and is the second oldest church cemetery in the Cove. During the Civil War, the political environment resulted in a "split" of the Methodists and the subsequent provision for a Methodist Episcopal Church North, initially using a log house and ultimately the Hopewell Church House on a knoll donated by Dan Lawson just east of his former home site. Although the building is gone, the Lawson Cemetery remains as a reminder of this church. The Methodists, never as dominant as the Baptists in the Cove, served the community well and provided value which certainly exceeded that of the images which are now so popularly represented." (via Cades Cove Preservation Association.)

If you'd like to know more about the life of the early circuit riders, you can read an earlier post of mine here.

I have always loved to learn about the history of places that I visit and I hope that you've enjoyed learning a little more about on of my favorite places. My husband proposed to me at the Elijah Oliver Cabin so I may have to dig up the history behind it to share with you in the future. Have you ever gotten to visit Cades Cove? What is your favorite part about it?