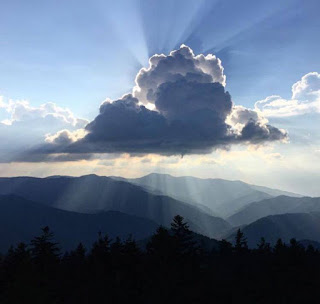 For God, who said, "Let light shine out of darkness," made his light shine in our hearts to give us the light of the knowledge of God's glory displayed in the face of Christ.- 2  Corinthians 4:6
*Photo by Sharon Fox*

I saw this picture, taken and shared by Sharon Fox, in a Facebook group that I follow. After reaching out to her to ask permission to use it, this scripture verse (2 Corinthians 4:6) came to mind. That verse led me to wonder what the early churches of Appalachia were like...which led me to think about circuit riders.

Honestly, the only thing I knew about circuit riders (before researching and writing this blog post, of course) was what I had learned from television or books that I'd read. The first character who came to mind was Preacher (Clint Eastwood) in Pale Rider. While I think that it is an EXCELLENT movie and that Clint Eastwood is an EXCELLENT actor, director and producer, it's not a great source for information on circuit riders. So, I turned to my books on Appalachia and the internet.

Circuit riders, also known as saddlebag preachers, were a group of primarily Methodist ministers who would travel to two or more churches which were spread out in a rural area that was 200-500 miles in circumference, known as a circuit. A minister was expected to visit each church on the circuit at least once a month, and possibly start some new ones. Far and wide, they preached as often as possible, at any site available be it a member's cabin, a school house, barn, or the great outdoors.

The typical circuit rider was a young, single man whose life had been suddenly transformed by a dramatic conversion experience. In the majority of cases, the only difference between a Methodist preacher and his audience was what side of the pulpit he was on. A formal Biblical education was rare. This served the ministers well in that their members felt as if they were cut from the same cloth.

Everything these men owned was usually what could be carried with them in their saddle bags. They truly trusted in God to provide a place for them to lay their heads and for what food filled their bellies. These men knew that their calling wouldn't lead to a comfortable, prosperous life but that didn't matter because they wanted to help bring God's light to the dark desolate corners of these rural areas. Most preachers didn't live to be 30 years old due to the wear and tear from constant travel and the harsh conditions of life.

Knowing that their time with each congregation was a short one, generally every two weeks to once a month, sermons had to be treated as a golden opportunity to reach people for Christ. When one is convinced that possibly but for this one sermon, souls are on the way to hell, it tends to make one take the task at hand very seriously. For the most part, sermons centered around converting the lost and the converts were then left "to work out their salvation with fear and trembling" on their own. The way might have been blunt (repent or go to hell), but it was effective.

To the lonely people, back in the dark hollers and coves, these circuit riders were their entertainment, their source of outside news, their moral compass, and most importantly, their preacher.

Posted by Appalachian Mountain Roots at 11:16 AM