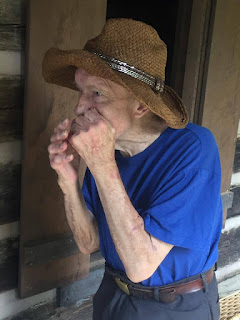 As I was walking around looking at the different demonstrations at the Union County Mountain Heritage Festival, I heard a very distinctive "boing-boing" sound coming from the 1861 John Payne Cabin. I knew I had to meet whoever was making that sound!

Mr. Willis Plott is a man of many talents. He is very skilled at caning chairs, making baskets, and playing the jaw harp. After I introduced myself, Mr. Plott told me that he is from the Gumlog community of Towns County, GA. When asked how long he had been playing the jaw harp and he said, "Well, I'd say about 40 years. It's not as hard as you'd think."

I didn't know a lot about the jaw harp so I was curious to find out more about the history of the instrument and it's role in Appalachian music. 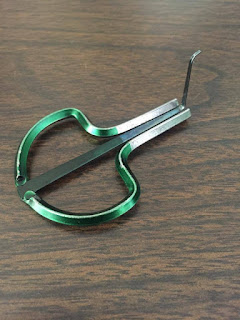 "The Jew’s harp (sometimes called juice harp or jaw harp) has been played in many cultures but is most closely associated with Europeans. In Appalachia, the instrument was traditionally played as both a solo and an ensemble instrument. The Jew’s harp is played by using the mouth cavity as a sound chamber and by plucking a reed positioned inside the body of the instrument. Most Jew’s harps found in Appalachia have been commercially manufactured out of metal." Encyclopedia of Appalachia


I bought one of the jaw harps that Mr. Plott had available and he gave me a few hints to help play it:
If you would like to purchase your own jaw harp, you can do so here. I'm sure I'll be hearing plenty of "music" as soon as my son figures out how to work mine! Is there anyone you know who plays the jaw harp?
Posted by Appalachian Mountain Roots at 2:26 PM