I love fall. The fruits and veggies are canned and on the shelves. The leaves are just starting to put on their last glorious display before saying goodbye. And the cooler temperatures have FINALLY arrived in my little part of Appalachia! That's western NC for those of you who are new to Appalachian Mountain Roots.

As much as I enjoy this season I can't help but wonder what kind of winter we can expect this year. Sure, I could read extensive scientific predictions from all of the "experts" but we both know that they don't really know any more than us plain folks. SO, I did what any country person does if they want to find out...I found me a persimmon tree!

Lucky for me we have a persimmon tree out at our old place and drove out to pick some Saturday afternoon. Most people wait until after the first frost to pick them but we found a couple that were already REALLY ripe. My father-in-law's honeybees were not happy that we were invading their territory so we grabbed a few that we could easily reach and skidaddled back to the car! 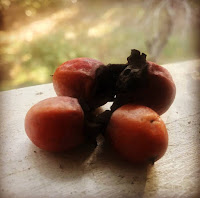 The deer and turkeys have left us with slim pickings! 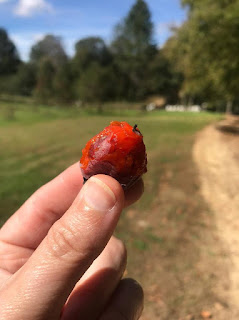 I had already peeled some of the skin off of this one before
I thought to take a picture. It was delicious!

After enjoying a couple we got to work splitting open the seeds. We cut through about 10 of them so we would have a good number to compare. And the persimmons seed says.... 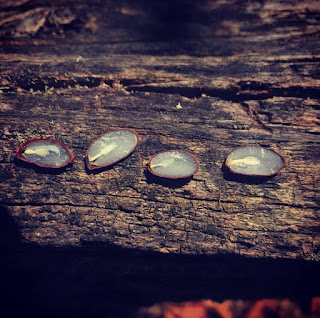 Looks like spoons to us! That means we can expect plenty of snow to shovel (spoon). We did have a couple that looked like a knife which means cold, "cutting" winds. Had there been a fork shape in the seeds we would have had a mild winter with some light, powdery snows.

I love snow so that might be part of the reason most of these looked like spoons to me. I think we see what we want to sometimes.

I realized that I didn't know a whole lot about persimmons so I decided to read up on them. This is what I found in Foxfire 3: "Persimmons are very high in food energy. The leaves, rich in Vitamin C, can be used for tea." The book, Folk Medicine In Southern Appalachia, says that persimmon juice on the tooth and gums is good for a toothache and for an earache, "A green piece of hickory or persimmon wood was thrown on a fire, and the sap emitted during burning was collected in a saucer and poured into the ear."

I guess only time will tell if the persimmon seed prediction is true or not. Like I said, I love snow so I'm hoping it's right!

Have you peeked into any seeds this year? What do the seeds say in your neck of the woods? You can leave a comment below and let me know!


Posted by Appalachian Mountain Roots at 7:56 AM