Hey, y'all! I was all ready to share another week of SSOs but decided to focus on the superstitions surrounding one topic: mirrors. Since we're only a week and a half away from Halloween, I'll share some of the spookier mirror superstitions.

*SUPERSTITIONS*
A superstition is an irrational belief, usually arising from ignorance or fear, that is believed by a number of people but is without foundation.
I've decided to be a little vulnerable and share a secret with you...I'm afraid of old mirrors. I hate them! I'm a lover of many old things and love visiting antique shops but as soon as I spot an old mirror, I'll do anything I can to avoid it. 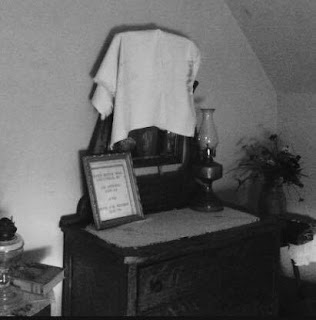 I think this fear comes from the superstition that goes along with covering mirrors when someone dies. I've never personally witnessed anyone practicing this superstition but have read about it and seen it done in some movies. One of my all time favorite novels is Fried Green Tomatoes at the Whistle Stop Cafe by Fannie Flagg. I'm going to go a little off topic for a moment so please bear with me...Fannie Flagg is one of my FAVORITE authors and I've read all of her books. She is a brilliant and hilarious storyteller. If you want a good dose of southern humor, check her out! Okay, now that that's out of the way, back to why I mentioned Fried Green Tomatoes...as most of you know the novel was made into a movie. Those of you who have watched the movie may remember the scene where Ruth dies in bed. As soon as she passes, Sipsey covers the mirror in her room. Throughout the movie, Sipsey is a very superstitious person and I can only conclude that she covered that mirror because she believed her doing so would allow Ruth's spirit to cross over into her new life. If she hadn't, Ruth's soul would have become trapped and she would have to stay and haunt all who remain in this world.

Like I said, I've never personally witnessed anyone practicing the ritual that goes along with this superstition but it must have been scary enough to stay with me. Every time I look at an old mirror I can't help but wonder if it was in a room where someone passed or possibly where a wake took place. What if they didn't cover it? I don't want any part of that! Nope, nope, nope. I'd like to think that I'm a mature gal who has a decent IQ but I can't seem to even logically convince myself that there isn't anything to be afraid of. Whether anyone thinks this one is ignorant or not, you can bet the farm on me not having an old mirror in my house!

*You still have time to win a signed copy of Appalachian Lore: Haints, Hexes, Hoo-Doos and Such. If you'd like to find out how to enter the giveaway, you can go here.