Why I started this blog & a little of my history...

Blogging is something that I've thought about doing for a couple of years.  My husband encouraged me to do it & write about what I love....and one of the things I love most is Appalachia!  I love the mountains, the people, THE FOOD, the traditions... I love it ALL!

Part of my family has lived in Cherokee County, NC for close to 200 years or that's as far back as I've been able to track it. I have also discovered that I am of Scots-Irish & Cherokee descent.  A large portion of Appalachia is made up of people that share this background.  According to the Encyclopedia of Appalachia: "The Scots-Irish were so influential in shaping Appalachia's settlement process that they have become an essential part of regional stereotypes.  They have been characterized as independent, resourceful, family-oriented, deeply religious, and skilled in woodcraft, as well as indolent, belligerent, violent, and unduly bound by tradition.  Regardless of their relevance, these stereotypes continue to shape the image of Appalachia.  Estimates of population are difficult to verify, but in areas of significant Scots-Irish settlement such as western NC it has been estimated that 30-35% of settlers before 1840 were Scots-Irish.  While it is unlikely that they compromised a majority of settlers in most places, they exerted a powerful influence in shaping the development of Appalachian culture."

I can agree that most of that description still rings true.  The people of Appalachia are, for the most part, a "salt of the earth" kind of people.  I have grown up and live in an area where people are willing to help each other.  Faith, family, and friends are everything.  I am blessed to know that I can always find someone to lend a hand whenever I may need it and I hope that my family and friends can include me on their go-to list of people that are willing to extend a hand to them.  While things in this area are changing daily, it still has that down home, small town feel.  I can't imagine living in a place where I couldn't see my mountains. This has and always will be home. 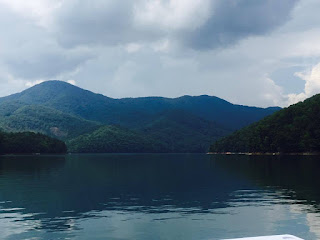 I will lift up mine eyes unto the hills, from whence cometh my help.
Psalm 121:1